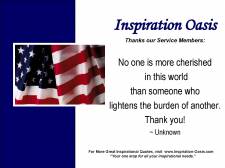 Military OneSource is provided by the Department of Defense at no cost to active duty, Guard and Reserve (regardless of activation status) and their families. It is a virtual extension of installation services.